THE GOODS ON THE SRF:

1. The SRF indirectly helps put U.S. Treasuries (USTs) on an equal footing with reserves when it comes to regulatory needs. In a world of never-ending deficits, that is an added bonus as banks over time would become even bigger buyers of USTs, alleviating the market’s reliance on foreign buyers. If banks are buying the USTs it also allows other market participants to provide credit and dollar funding for other opportunities, which frees up cash.

2. As you can see, as U.S. deficits have risen, a lot of Treasury paper is now sitting on dealer balance-sheets. An SRF could indirectly help if its launch made large banks more willing to buy those Treasuries instead of dealers. It follows that if dealer holdings are reduced as a result of SRF adoption, it could help reduce quarter-end repo rate spikes. 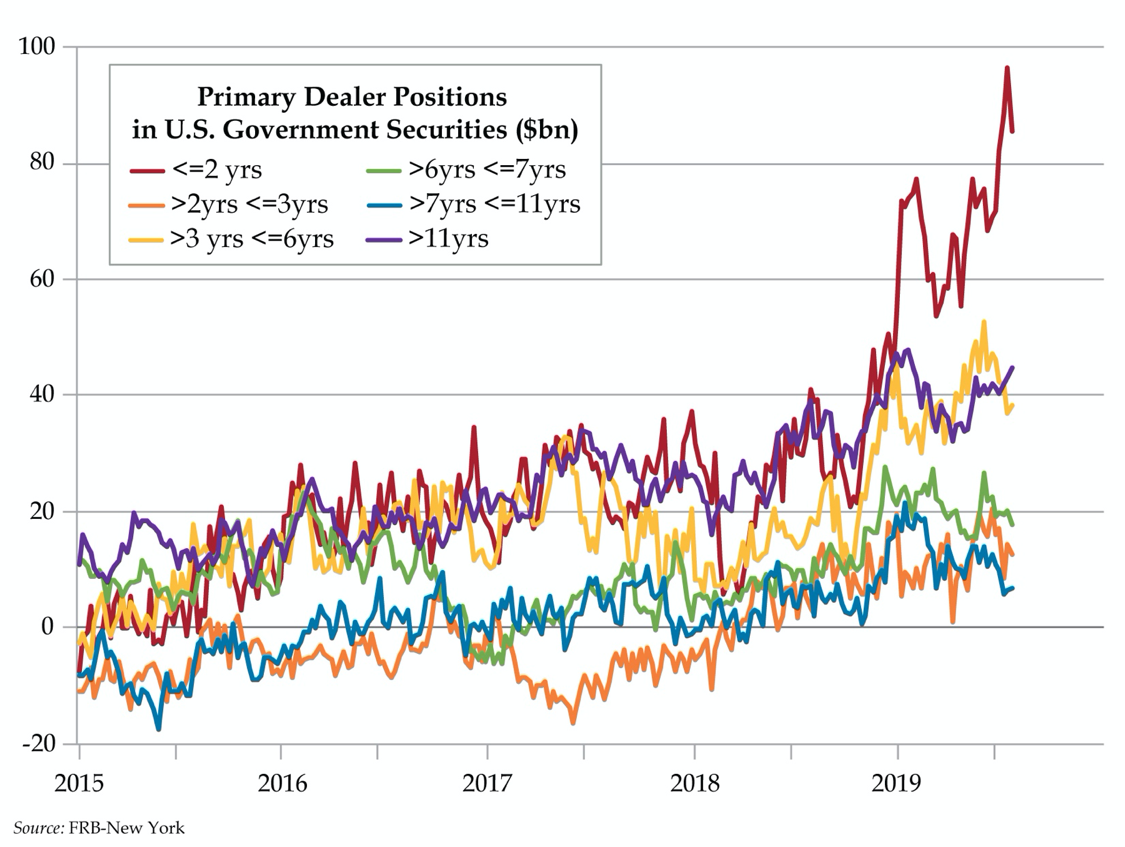 3.  A long-term goal for the Fed is the introduction of a new reference rate called the Secured Overnight Financing Rate (SOFR). However, SOFR (which is intrinsically linked to Treasury repo rates) has been ironically more volatile than LIBOR, the rate it aims to replace. By establishing the SRF and reducing overall repo volatility, the Fed would smooth the LIBOR to SOFR transition, another major event ahead for markets.

4.  This last positive is not a strong one, especially if the Fed will eventually need to relaunch more quantitative easing (QE) in the next downturn and further grow its balance-sheet. In theory, if the SRF were launched and became a credible and reliable tool, it could facilitate the Fed in shrinking its balance-sheet and reserve balances.

5.  If currency in circulation keeps growing, over time the Fed could even reduce the IOER rate further and get past some of the political optics of paying banks (many of them foreign) that are sitting on cash (reserves). That said, the SRF only would help dollar liquidity if the Fed kept the balance-sheet unchanged and banks became marginal buyers of Treasuries over-time and only used the SRF when they need short-term liquidity.

THE NOT-SO-GOODS ON THE SRF:

1.  The law of unintended consequences is the big one. If the SRF facility parameters are not set right, it could over-liquify the system and collapse all arbitrage trades that occur naturally over the course of trading in the UST funding curves. It has the potential to either mask or kill price discovery damaging disintermediation of money markets.

2.  In times of stress, the SRF could balloon the Fed’s balance sheet as banks and dealers monetize USTs via Fed SRF to source cash for redemptions. Some have characterized this aspect as “QE on demand.” The flaw in this logic is the SFR would involve short-term repos and therefore should not be perceived as a permanent Fed purchase. Call this a soft negative. If the economy deteriorates sufficiently, they will relaunch QE and that would render meaningful usage of a SRF as the equivalent of a bridge loan before QE.

3.  For the SRF to succeed, market participants would need to get over the stigma of using a discount window “lite” tool. The Fed could assist with very low or no haircuts on all USTs for SRF purposes and no duration tiering of haircuts if they have a marginal one (i.e. the same for all maturities).

To work, the SRF would need to be open to a broad array of financial institutions.  The authors of the original paper liken the SRF to the reverse repo program (RRP) currently in place. That makes a lot of sense if a corridor is established. So SRF could, if launched could create symmetry on the top and complement RRP at the bottom of the target range.

It’s worth noting that the SRF seems novel but other global central banks have similar tools already in place. The biggest caveat is that while the SRF could help the Fed control short-term rates, the more they tinker with the largest government bond and dollar funding market in the world, the greater the risk of creating unintended consequences.

Most importantly, if the recent Fed move toward cutting rates is not deemed enough to “sustain the expansion” they may skip this SRF tool all together and go right towards massive easing and eventually QE.