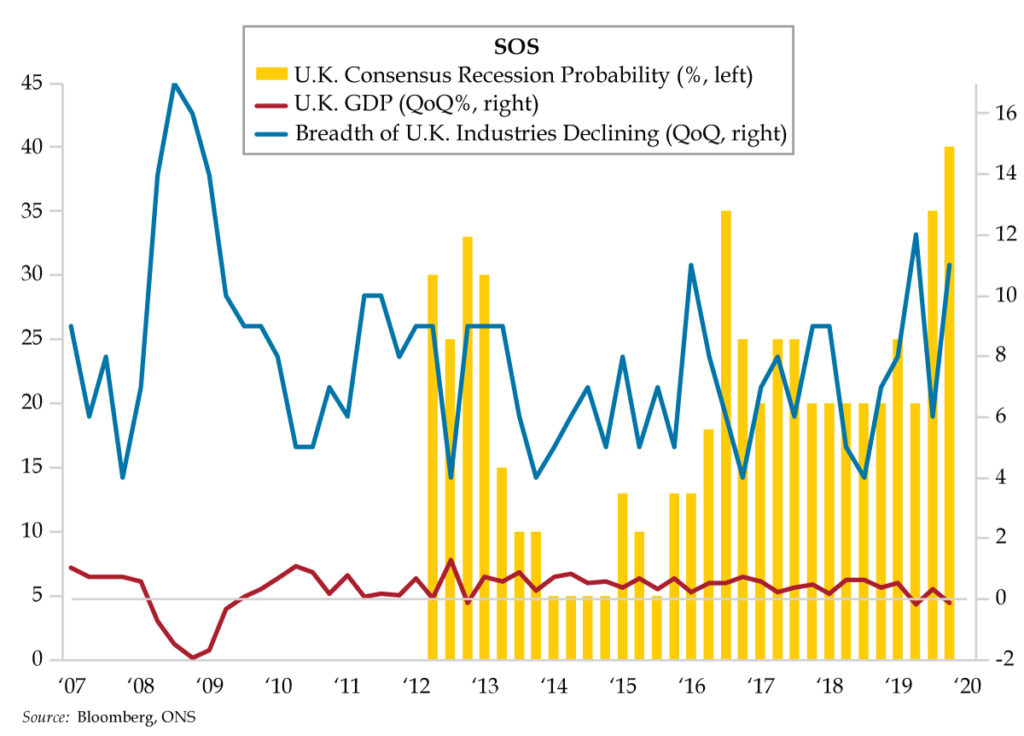 Before British punk rock band The Clash topped the U.K. singles charts with its mega-hit, “Should I Stay or Should I Go,” it was the 1979 song “London Calling” that stood as its biggest commercial success. The apocalyptic, politically charged scrant (song marries rant) screamed of the “nuclear error” at Three Mile Island and the risks of the River Thames flooding the majority of central Londoners. The Clash’s lyrics also voiced desperation at the band’s straits, struggling as it was with high debt, no management and tensions with its record label after punk rock’s 1977 demise.

Fast forward forty years and that sense of urgency translates to the near-term economic outlook for the U.K. Yesterday’s economic reports on Gross Domestic Product (GDP), Industrial Production and International Trade combined to push the Citi Economic Surprise Index for the U.K. into negative territory, to -9.8 from a reading of 4.3 on Friday. The 14.1-point swing was the largest for any day since early July. The best news is market participants haven’t been that disappointed in four months in what is arguably a fluid dynamic.

Economic surprises compare outcomes to expectations. Looking at the GDP through the consensus’ lens conveyed relief on the surface. Delve beneath the headline and you see the real risk.

Top-line Gross Domestic Product (GDP) rose 0.3% in 2019’s third quarter, a slight disappointment vs. market expectations (0.4%), but a full reversal – and then some – compared to the second quarter’s 0.2% decline. The level of third-quarter GDP pushed above the first quarter, and most importantly, recession risk was quashed; no back-to-back quarterly declines in the registry. All this economic giddiness aside, the 1.0% year-over-year expansion (0.97% unrounded), did mark a nine-year low.

The composition of U.K. economic growth echoed the weak industrials/strong consumer theme that’s played out not just in Britain, but in other locales around the world against the backdrop of an escalating trade war.

In the event you’ve misplaced your playbook, business investment lags and consumer spending leads. Outside the U.K., a large gain in exports was offset by a further drag from inventories, after the first Brexit-deadline stockpiling came to a head in the first quarter.

For you real timers, the U.K. Office for National Statistics produces a monthly GDP report that foreshadows the aforementioned quarterly data. This monthly take adds value via a higher frequency look-through to industries with a prism into near-term momentum. The back-to-back monthly declines in August (-0.2%) and September (-0.1%) segue to a lower jump-off point for the fourth quarter. To illustrate, we utilize one of the tricks of the forecasting trade.

The level of aggregate economic activity in September vis-a-vis the entire third quarter average proxies fourth quarter growth. That calculation is in the red, at -0.1%, meaning there’s no momentum for the U.K. economy heading into the fourth quarter. More importantly, a second quarterly contraction could be in the offing after the second quarter’s decline. While that’s not a set up for a technical recession – two straight quarterly declines – it’s about as close as it gets.

Critically, this isn’t a narrowly based rollover in growth. Eleven of the report’s twenty industries lost enough forward motion in the third quarter that they’re starting out the fourth quarter in the hole. The ones flashing red now include (in no particular order): natural resources, manufacturing, utilities, construction, wholesale/retail, transport/storage, hotels/restaurants, finance/insurance, administrative support services, education and arts/entertainment/recreation.

Take a gander again at this list and you’ll see a widespread representation across cyclical sectors. We offer that this should be the main takeaway from yesterday’s deluge of U.K. economic reports.

Taken together, it’s no surprise that Bloomberg economists surveyed placed a 40% recession probability for the U.K. sliding into recession for a second straight month in November. This matched similarly dour expectations for Germany earmarking these as the only two developed market countries with the 40% probabilities of developing a case of the ‘R’-word.

Yesterday’s fundamental weakness emitted in the data would have you thinking the British pound traded down on the day. Intuitive as that is, Sterling rose the most in over three weeks as domestic political risk receded. Nigel Farage proclaimed that his Brexit Party will allow Boris Johnson to secure a parliamentary majority to end the impasse over leaving the European Union. Johnson tweeted that he welcomed Farage’s recognition that “another gridlocked hung Parliament is the greatest threat to getting Brexit done.”

As the rest of the trading world celebrates, we caution that removing Brexit uncertainty will unleash currency tailwinds at just the time the economy is losing steam. A further rally in the pound couldn’t arrive at a worse time as service industries join industrials in the macroeconomic struggle. Is it possible we’re the only ones hearing the end of “London Calling” playing in the background?