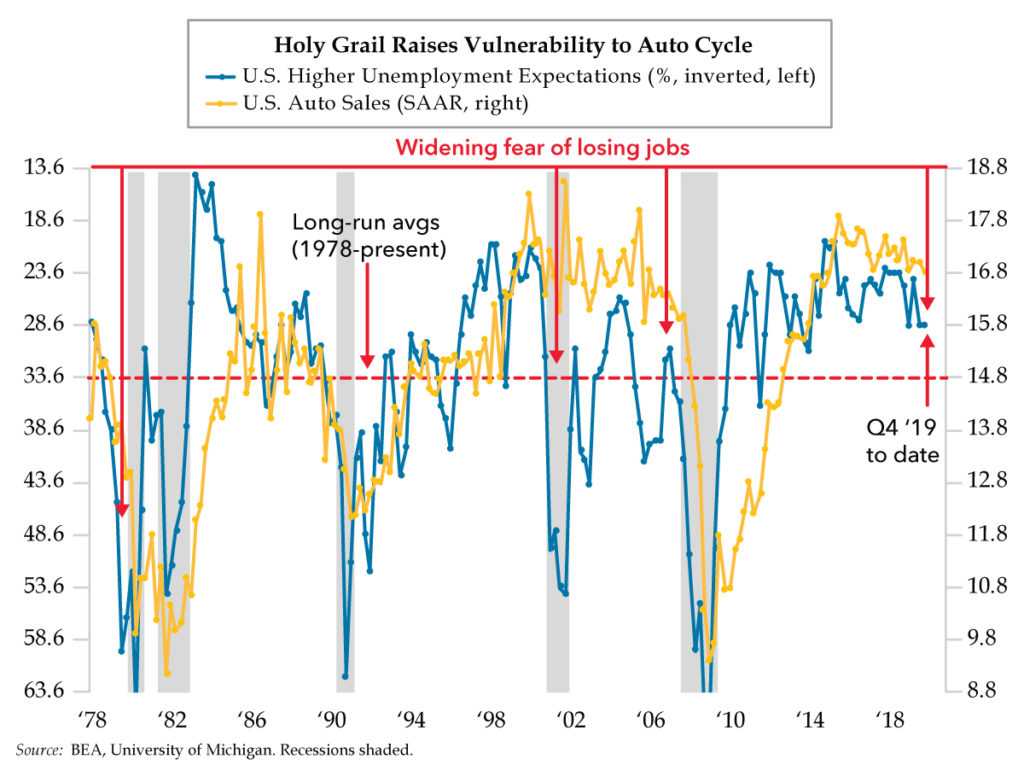 Still jittery from that holiday table chit-chat that turned ugly after the littles were excused to dive into their loot? Wouldn’t it be nice to return next year as a member of the Chamaeleonidae family, capable of literally fading into the woodwork? If Christmas falling on a Wednesday has left you contemplating the 4-day weekend and you need something to do with your free time, why not stop into the American Museum of Natural History. The Amber Collection, arguably the world’s most important fossil collection given its strong showings in both the Tertiary and Cretaceous eras, is a must see. Did you know that amber preserves microscopic fidelity? As such, you can take in the first known chameleon, dated to 100 million years ago, from Myanmar in Southeast Asia.

While you’re working on that molecular transformation, we’re stuck admiring the chameleon of economic data, one capable of shedding light on the prospects across economic genres as diverse as growth, inflation, corporate earnings and equity prices. It’s QI’s holy grail of economic indicators — higher unemployment expectations.

When consumers’ fears of future job loss are on the rise, they’re more apt to be more frugal; conversely, allayed anxieties translate into a greater propensity to open the wallet. At last check, the U.S. is still a consumption driven economy with more than two-thirds of growth tied to consumer spending. So yes, perceptions of whether your paycheck is going to grow or shrink are key.

It follows that the bigger ticket the item, the more confident buyers must be, signing on the dotted line. Car sales have been a huge source of support in the current cycle. But we’ve known and written about sales slowing for some time.

At cyclical inflection points, anecdotes are often more helpful than hard data. Consider this excerpt from this past Saturday’s Wall Street Journal revealing dealers’ desperation to move product: “The scope of false applications is hard to quantify. PointPredictive, which sells software to detect loan fraud, estimates that more than a fifth of auto loans have inflated incomes. The company examined loans made over the past four years where lenders obtained borrowers’ personal records, and compared those with the income stated on applications. Its data can’t distinguish who is responsible.”

Further pressure yet will fall on upper-income and middle-income consumers to support car sales – if the widespread perception that economic conditions are good begins to falter. The best news is these cohorts are the least concerned about their finances given many have benefitted from the Powell Printing Press. These folks are also not likely one in the same with the growing numbers collecting unemployment insurance, driving the increase in unemployment expectations.

At the top of the chart, we’ve highlighted late-cycle periods when job market fears were rising, but the trend in auto sales had yet to crack. The opposite occurred post-recession when layoff worries dissipate manifesting in pent-up demand for the ensuing economic recovery.

The most recent episode of labor anxiety hasn’t been severe enough to call a definitive downturn in the auto cycle. That said, 2019’s unemployment expectations have been more elevated than at the height of the 2015 slowdown that foreshadowed a peaking in auto sales.

Cushioning the blow, automakers and dealers have gotten aggressive with incentives. Zero-percent financing and employee pricing have become commonplace while some have resorted to “sign-and-drive” or offers to cover buyers’ first three monthly payments, which we suppose beats fraud.

Unemployment is the third pillar supporting autos after prices and interest rates. When this last pillar crumbles, the whole house collapses given its financing foundation. You’re familiar with the first rule of financed purchases: You. Need. A. Job.

As we look to 2020, Fed and Street economists are projecting a stable unemployment rate. Ergo, few foresee an end to the auto cycle. Coupled with rising continuing jobless claims, our chameleon indicator, higher unemployment expectations, suggest insufficient job market deterioration is priced in.

After three straight months of declines, Detroit was likely relieved to see November’s 1.9% month’s rise in auto durable goods orders. But they’re still down 5% over the prior 12 months. QI’s holy grail of economic indicators will have to full-on-chameleon change its colors to signal U.S. autos can make the turn.