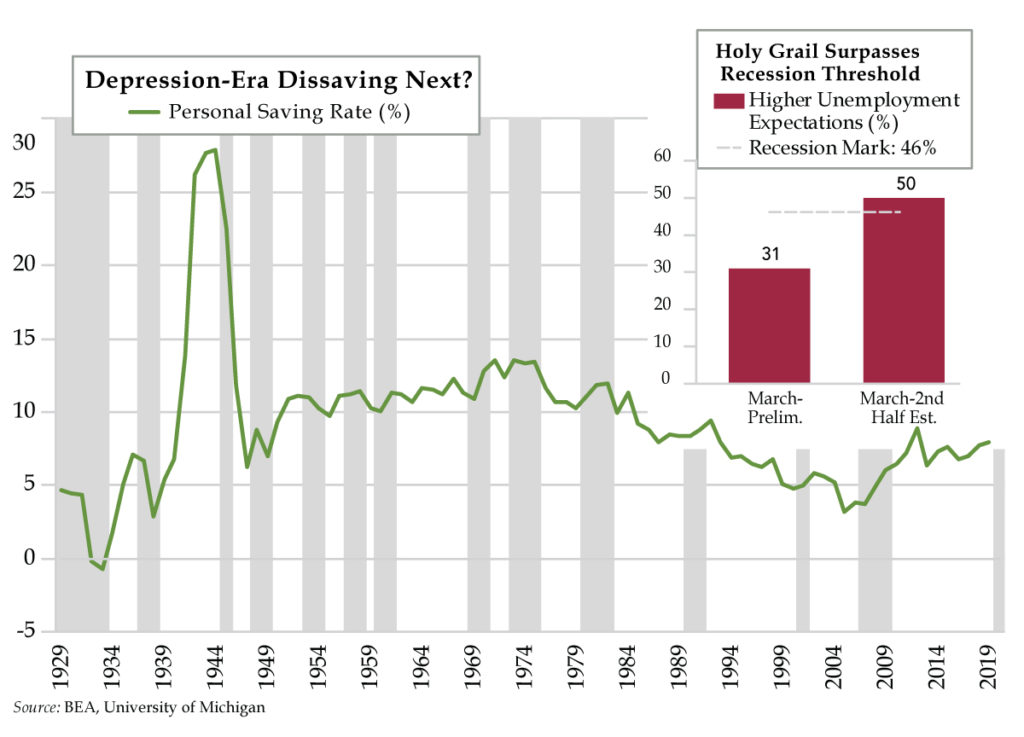 The 14th century East Javanese were admirably frugal folk. The island Indonesian nation is where the first pygg jar was made from the terracotta-colored ‘pygg’ clay. As for the form assumed, the term ‘cèlèngan’ in Java means ‘likeness of a wild boar.’ Think fortitude. Sadly, few artifacts remain. Inevitably, rainy day funds were tapped by smashing the pygg jar. The name, however, stood the test of time. By the 18th century, ‘pig banks’ were a hot item in England. The rarity of finding an intact pig bank was on full display at a recent auction in which a 650-year-old survivor sold for $10,000.

Households the world over are finding out exactly what’s in their piggy banks. In many cases, a hammer to the ceramic pig reveals only smashed pieces. Whether by choice or by necessity, the safety margin of countless households is razor thin. And it’s anything but isolated to the culturally profligate Americans. It’s difficult to name a developed economy that is not dominated by consumption, including China where 60 percent of GDP is now tied to spending.

Bloomberg reported that in February, overdue credit card debt ballooned by 50% over the prior 12-month period. Qudian, an online lender based in Beijing, reported its delinquency rate had risen to 20% in February from 13% at the end of 2019. The list goes on, all attributable to the estimated eight million Chinese workers who lost their jobs in February.

A similar number of U.S. workers could easily lose their jobs in the space of a month by the time the jobless claims are processed and the unemployed begin collecting benefits. And while lenders will no doubt be asked or ordered to extend forbearance, such grace will not expunge the debts absent bankruptcy.

As QI friend Torsten Slok pointed out Sunday, U.S. household balance sheets were stressed going into the coronavirus outbreak with delinquencies on auto loans particularly problematic, near the peak of the last recession. Cars, more than any other household asset, are emblematic of the current cycle. Lending standards were the most lax on record allowing buyers across the income spectrum to buy more car than they could afford to drive. While car owners will be able to skip payments via certain lenders, repossessions will inevitably rise.

“With 25% of US workers making less than $600 a week, how deep this recession will be depends importantly on how long it will take before the stimulus money arrives into the hands of consumers,” Slok observed. The Treasury Department announced it will take three weeks for the stimulus money to hit households’ accounts. And we know that job losses began to rise markedly beginning the week of March 9th. In the case of millions of Americans who make less than $75,000 a year, they will have been out of work for five-six weeks before they see the $1,200-$2,400 check.

Less clear is how many small businesses are going to rehire workers using the small business loans that will be forgiven. Households aren’t overly encouraged. In today’s inset, you see a lot has changed since March 11th, the last day of the two-week period during which the University of Michigan surveyed 400 households. Way back then, 31% expected unemployment to rise over the course of the next 12 months. In the space of the two subsequent weeks, during which 300 households were queried, 50% indicated the same, crossing the 46% level historically associated with recession.

Richard Curtin has been observing spending patterns through the prism of the Consumer Sentiment Index for 48 years. He’s seen more cycles than most and is generally an optimist. The word “record” is not one he’s used in recent years unless it pertained to sentiment improving. His observation on the most recent seven-day Index average was thus surprising: If it stabilizes at the current level, the implication is that April will fall by an additional 18.2 Index points setting a record two-month decline of 31.1 points.

As for that stimulus, Curtin warned that “Mitigating the negative impacts on health and finances may curb rising pessimism, but it will not produce optimism. There is no silver bullet that could end the pandemic as suddenly as the military victory that ended the Gulf war. To avoid an extended recession, economic policies must quickly adapt to a new era that will reorder the spending and saving priorities of consumers as well as the relative roles of the public and private sectors in the U.S. economy.”

Too few grasp the enormity of the societal change that is upon us. Americans will not be characterized as spendthrifts once we come through this. Surviving this pandemic will initially cause the saving rate to crash. But then it will rise to new levels concomitant with surviving a depression. The piggy bank is back.