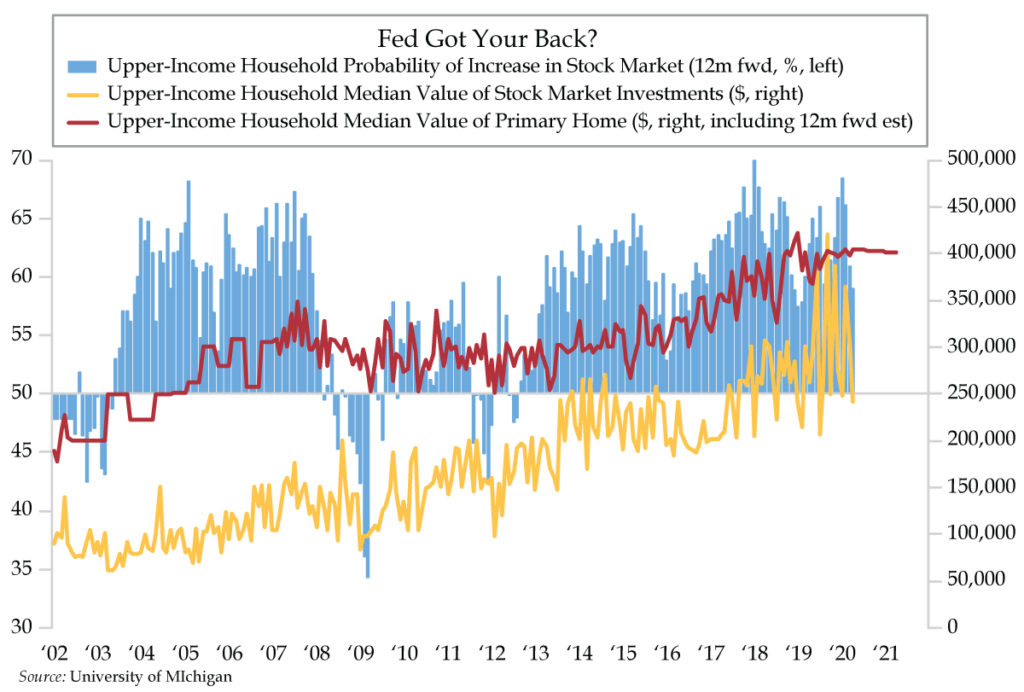 If only true sports were virtual. Last Thursday’s NFL Draft drew an audience of 15.6 million, a 37% increase over last year and 26% higher than 2014’s blockbuster Johnny Manziel draft. With all of the quality indoor time we have with our families, the fourth overall pick in the first round reminded us of one of QI’s favorite football flicks. The literal premise – that the quarterback is at his most vulnerable when he’s blind to what he’s turned his face from to pass the ball. Given the NFL has not a single southpaw, left tackles are at a high market premium. Giants fans are thus delighted to welcome Georgia Bulldog Andrew Thomas to their offensive line. He started college as right but quickly moved up to left tackle and has the grit to “get the job done.” Until we get to see those 100 yards live again, enjoy Sandra Bullock’s Oscar-winning performance in the incomparable The Blind Side.

Though it’s bought precious little in the way of assets, Jerome Powell and his team on the Federal Open Market Committee (FOMC) have served up an abundance of lip service to cover investors’ blindsides. What few appreciate is that Powell hasn’t had a moment’s peace since arriving in office, at least when it comes to what comes out of his mouth. Zoom in on those blue bars in today’s chart that represent Upper-Income Household Probability of Increase in Stock Market in 12 Months. You know the math – those who make the most own the vast majority of stocks, a subject that’s (rightly) become political tinder in recent years thanks to Fed policy. To be precise, upper-income median stock market holdings of around $250,000 are five times larger than that of middle income, at roughly $50,000 and 10 times larger than that of lower income at $25,000. Upholding confidence in the stock market means keeping that tony cohort happy, whatever that requires.

Now, note when those blue bars peaked at 72% in the series that’s been around since 2002. The date was January 31, 2018, five days before Powell assumed the helm at the Fed, greeted by a 1,000-plus point nosedive in the Dow and a 4.1% routing in the S&P 500, the worst since 2011. At his first FOMC confab that March, he pushed through the first rate hike which was followed by three more in 2018, much to upper-income households’ dismay.

Powell’s one-year anniversary in office saw the probability of stocks rising by those who make the most fall to 57.4% – the Powell-era low point. January 2019 also featured the first Powell Pivot. He’s been back-tracking ever since, trying desperately to keep risky credit, and by extension, the stock market in check. And it has everything to do with maintaining what QI dear friend David Rosenberg observed of 2019 – that the correlation between GDP and the S&P 500s was 7%, i.e. non-existent.

That’s exactly what Powell must hold the line on. Stocks’ initial sell-off on news that the coronavirus would drag the U.S. and global economies into the deepest slump since the Great Depression was a game changer for Powell. Reality must not be reflected in stocks. The alternative is unthinkable – that the reset in asset prices take down the big and middle guy and gal.

The failure to get relief to middle-income households who own small businesses was all over American Express pulling its earnings guidance with the following warning: “It’s impossible to forecast our financial results for the rest of the year without knowing the answers to [the] two questions…: ‘When and how quickly the economy improves, and what happens to unemployment and the pace of small business recovery?’”

While damningly bailing out speculators in the process, by propping up their stocks and forcing the capital markets to stay open to unqualified corporate borrowers, Powell is trying to prevent the biggest players from pushing through that second wave of layoffs we’ve been writing about. Tragically, those layoffs will target the same middle class being ravaged by a lack of small business relief.

Even more importantly for the economy, “upper-income households” can also reference upper middle-class families who comprise the aspirational buyers who live beyond their means confident that their incomes will allow them to skate that line. As per a December Bankrate poll, 57% of those with net worth between $100,000 and $199,999 carry, as in don’t pay off, credit card debt.

One last step – combine all three series in today’s chart on the upper-income cohort:

The message: The top 20% of income earners, responsible for 40% of U.S. consumption and in control of the pink slips that will unleash that second wave of layoffs are quickly losing confidence in Powell’s ability to play left tackle and prevent them from being sacked. It comes down to whether liquidity can resolve insolvency, a subject we’ll explore in greater depth in this week’s Quill.