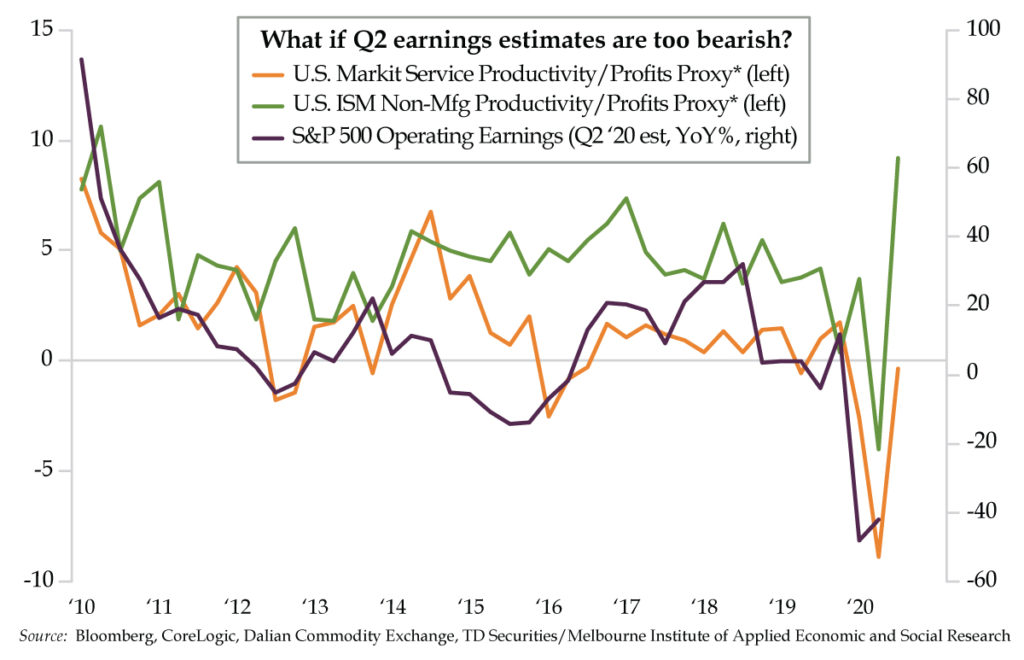 In 1587, some 410 years before Al Pacino and Keanu Reeves’ horror flick, Pope Sixtus V formally established what came to be known as the office of the devil’s advocate. The term itself was not introduced until the early 15th century by Pope Leo X. In the Roman Catholic church, Advocatus Diaboli, acted as the promoter of the faith who critically examined the life of, and miracles attributed to an individual proposed for beatification or canonization. In keeping with its modern-day connation, this individual was charged with presenting arguments that were unflattering to the candidate in opposition to (of course) God’s advocate, Advocatus Dei, whose job was to make the affirmative case in favor of canonization. To the dismay of debaters worldwide, the office was abolished when Pope John Paul II revised the procedures in 1979.

We have business surveys from IHS Markit and the Institute for Supply Management (ISM) to thank for helping us formulate arguments against such downbeat profit expectations. The proxies depicted above from the Markit Services report (orange line) and ISM Non-Manufacturing survey (green line) were built as higher-frequency, monthly guides for quarterly productivity statistics.

The crux of the argument against the pessimism built into the second-quarter earnings expectations stems from record swings in both productivity/profit proxies in May. We’ve written before of the differences between Markit and ISM samples; the former includes ‘C’-suite perspectives from businesses of all sizes and the latter aggregates views from procurement professionals in predominantly larger corporations. At the moment, both metrics are saying the same thing: surging productivity and positive profits.

We purposely plotted quarterly profiles for all three series knowing the last two data points for the proxies cover April and May instead of the entire second quarter. The cratering in April is more consistent with the depressed earnings profile that’s barely bouncing in the second quarter (purple line). The May moonshot could be the precursor to upgraded earnings calls by the Street.

Might that just be the capitulation needed for the S&P 500 Index to fully regain the 1148.75 points that were lost from the February 19th high to the March 23rd low? As of yesterday’s close, the S&P had retraced 885.47 points, or 77% of the total decline.

When playing Devil’s advocate, there must be a counterpoint. An improvement in the path for corporate profits should not just be about a widening spread between revenues and labor costs. Should top line pressures persist, they would feed through to the bottom line, forcing more labor dislocations. To inform this theme, let’s look to the microeconomic world through a key macroeconomic sector that defines business cycles, namely autos.

AutoNation is the number one auto dealer in America, period, end. About half its revenue comes from new vehicle sales, a quarter from used cars and the balance from parts, service, finance and insurance operations. AutoNation ended 2019 with 25,000 employees. In April, it furloughed 7,000 of them (think “temporary”). And then yesterday, it announced that 3,500 of those unlucky folks will be permanently laid off. The back of the envelope math puts its labor capacity at about 86% versus last year. The company also returned a $77 million Paycheck Protection Program loan. Guess there was no need for those funds after deciding on the hard cuts.

The permanent narrative is not unique to AutoNation. It’s evident in other service industries of entertainment, professional services and education.

Last Friday, the Arizona Diamondbacks laid off more than 25% of its staff with the remaining employees taking a pay cut. Deloitte & Touche’s CEO warned its employees of 2,500 job cuts. And earlier last week, Stanford University’s President Marc Tessier-Lavigne shared the message that his institution won’t suffer a temporary budget blip; workforce reductions are unavoidable, news of which will be communicated in late July.

Playing Devil’s advocate did not yield a convincing enough argument for our discerning minds. The Coronacrisis is creating permanent damage that will accumulate with time. It is doing so in small increments and will spread out over weeks and months before forming a critical mass. Until then, the reopening steamroller continues to push forward in technical fashion for equity bulls. Enjoy it while it lasts.