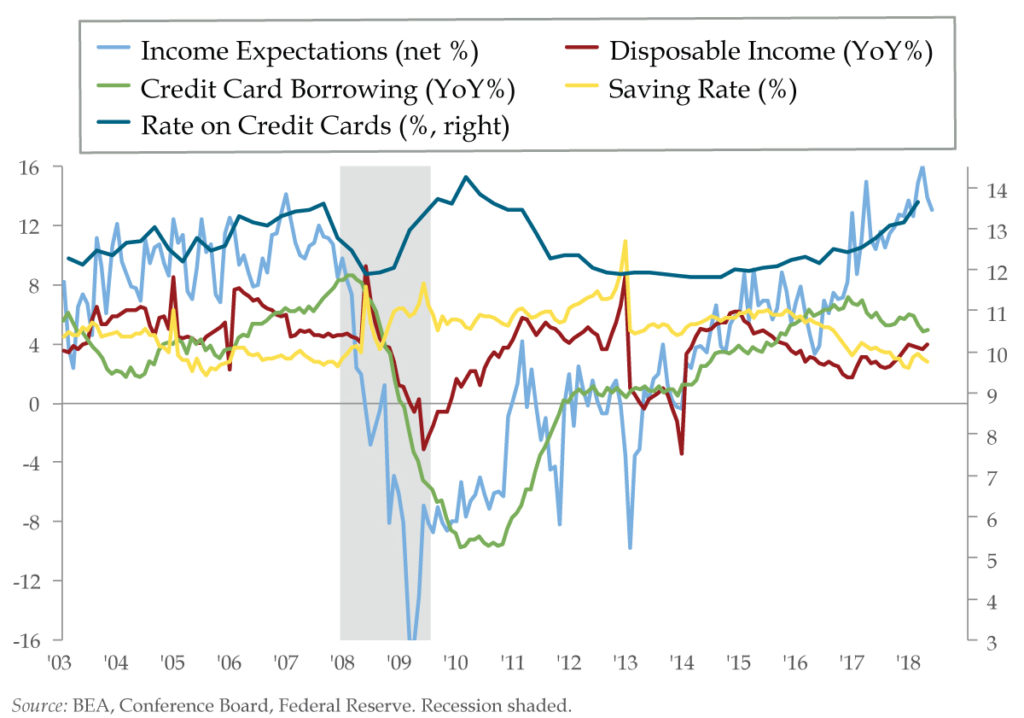 For contrarians, conventional wisdom can be a bit tough to swallow. It is generally accepted that U.S. household budgets are in good shape. Mortgage debt has drifted down, via mostly defaults, to more sustainable levels. And while the past decade’s growth has been historic, the aggregate of car, credit card and student loan debt is nevertheless manageable, especially at prevailing interest rates.

If you apply ceteris paribus, yet another overused guidepost – as in all other things being equal – the conventional wisdom holds. The problem is that’s rarely how the real world operates. Interest rates and inflation are both rising rendering both accepted truths false. When adjusted for inflation, upper-income weekly earnings have already slipped into negative territory. Middle-lower income weekly hours meanwhile are positive but not by much and their savings are depleted on a relative basis.

Next week promises to put further downward pressure on the existing trends. The consumer price index is expected to hit 2.7%. And barring an asteroid hitting, Federal Reserve policymakers will raise interest rates another quarter-percentage-point. So we know that wage growth will continue to be countered by offsetting forces.

Ordered to the front lines will be housing, which consumes at least one-third of the average household’s budget and is by far the biggest line item. As for the starting point, the cumulative effect of the combination of rising inflation and borrowing costs is already biting into housing affordability.

Black Knight figures that the combined effects of rising mortgage rates and never-ending home price appreciation have pushed monthly mortgage payments on the median-priced home up by $150 a month since the start of the year.That works out to a 14% increase in five months. The data firm is clear on the outlook: “The current combination of home price appreciation and interest rate increases is unsustainable.”

Sounds like they expect the seller’s market to give way to a buyer’s market. How is that the case when forward income guidance is positive, take-home pay has gotten a fire lit under it from the tax cut, households are levering up with credit cards and the saving rate is falling?

While there is no disputing the unsustainability of housing, Knight offers reassurances that even though affordability is the most stretched since 2010, at 23%, the share of median income needed to afford a home is “still below long-term benchmarks.” OK, so it’s not the 34.6% share-of-income peak that was clocked at the height of the housing bubble. But is that fair?

How valid is it to compare today’s affordability to the biggest housing bubble since that which led to the Great Depression?

Income declined in the last cycle. That’s not how our generation ever thought. Workers that didn’t get cut in the last cycle and kept their jobs and had their pay cut in turn probably felt lucky. Permanent dislocations have been a long road to pave (not the quick job that Lightning McQueen did in Cars). It’s taken 9 years – 9 years! – for job leavers to go above average. And it took a corporate tax cut creating greener pastures to get us there.

With the cost of carrying debt rising more sharply, consumers are finally saying it’s time to slow down the pace of borrowing. In yesterday’s April consumer credit data, consumers added $9.3b of debt, the 2nd lowest amount since July 2012.  Non-revolving debt made up of mostly student and auto loans, saw a rise of $7b of this, the smallest since September. For perspective, this component of borrowing is up 73% from the previous PEAK in July 2008.  Revolving credit, mostly credit cards, rose by $2.3b m/o/m after a net decline of about $1b in Q1 which came after a spending party in Q4.

Keep in mind that most of this debt is floating rate.  This gets back to the whole point that in a credit driven cycle, rather than one driven by savings, the cost of credit drives spending decisions.  And it’s getting more expensive.